Militaries are not usually mobs of men and as technology has more impact on the way wars are fought more detailed organization is required. A lot of different things affect organization, tactics, training, weapon availabity and deployment to name a few.

A military organization must have some degree of flexibility in the way it is structured. 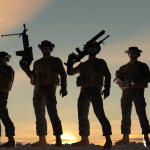 It’s hard to say whether an organization is structured from the top down or vice versa, in reality it usually ends up somewhere in between. However, for practical purposes I will start at the bottom and work my way up. To detail each type of unit and its organization would require volumes of text so I will stick with basic infantry and armored units.

In an infantry organization, the basic ‘unit’ is the individual. It takes individuals to make up a unit. Without people there is not a military.

In many military organizations two people make a battleteam, sometimes called a buddy team. Sometimes battleteams are mixed and matched according to the situation. While most militaries don’t recognize the two man team officially, it is very prevalent and important. Almost all combat tactics revolve around two people. One person covers the movements of the other. In the defense a minimum of two people are stationed in the same fighting position sometimes more.

The two man battleteam provides moral support as well as fire support in all combat operations. A buddy can provide first aid to his partner, can provide security while his partner digs the fighting position, covers the movements of the other and so on. People in the battleteams are almost always interchangable but a two man team is a basic ‘unit.’

The smallest recognized unit is a fireteam. The size of a fireteam varies according to the armament of the unit. Fireteams are usually organized around a machine gun, with some exceptions. In general however, there is one light machine gun in each fireteam. The machine gun usually has at least one assistant who carries extra ammunition and maybe a spare barrel.

The fireteam leader is the senior member of a fireteam and is responsible for the placement and operation of the machine gun. The machine gun is not assigned to the senior member because he is responsible for the ‘big picture’ and the operation of the weapon requires a great deal of attention. The only time a team leader will pick up the weapon is when everyone else in the team is dead or wounded (or completely incompetent).

One example is the United States Marine Corps. There are four men in a fireteam. One team leader armed with an assault rifle and grenade launcher, the next senior man carries the SAW (Squad Automatic Weapon) and two warriors armed with assault rifles.

Sometimes the composition of a fireteam will vary according to the weapons used and basic tactics. A Marine Corps machine gun team might have four warriors, a team leader, the machine gunner with a medium machine gun and two riflemen who carry extra ammo, the tripod and one or two extra barrels.

Soviet mechanized squads usually have two meduim machine guns, four riflemen (one is the squad leader) and an anti-tank gunner. The anti-tank gunner stays next to the squad leader with a machine gun on either side. Mechanized troops carry heavier weapons because the majority of their equipment is carried in the IFV. Light infantry are more lightly armed because of the additional equpment they must carry.

Weapons frequently dictate how squads and fireteams are organized. A medium machine gun is best operated by more than one person. One person to aim it and another to feed ammunition. One man can operate a medium machine gun alone but usually not while standing (like Rambo). Also many medium machine guns use tripods that must be carried and set up to improve accuracy and effectiveness. Light machine guns usually have lighter ammunition, are easier to handle, have a higher rate of fire and can be operated by one person with relative ease (compared to a medium). Heavy machine guns require a tripod or mount and cannot be fired by someone standing under any conditions.

Fireteams are organized around special weapons while squads are composed of similar fireteams.

A platoon is composed of two or more similar squads. The average number of squads in a platoon is three because it gives the officer two squads to fight with and a squad to keep in reserve.

A platoon composed of tanks, IFV (Infantry Fighting Vehicles) or APC’s (Armored Personel Carriers) substitues vehicles for squads. An armored platoon usually consists of three or four vehicles. Deployment is a little different. One vehicle is usually used to maneuver with while the others are kept in reserve. There are many reason for this but essentially it means that the maneuvering tank is protected by others.

This does not apply in large open areas (like the desert) where tanks are not restricted in their operations. In a city or other restricted terrain it is critical because tanks and other armored vehicles are more vulnerable than most people would believe.

In an armored platoon the commander will occupy, and command one vehicle.

A company is composed of two or more platoons. In most armored formations the platoons are composed of identical vehicles. There are usually three regular platoons in most militaries. This allows the company commander to deploy two platoons and keep one in reserve.

Weapons platoons usually have several different weapon systems. In combat the platoon is usually not deployed as a platoon, they are just kept together in garrison for training and administrative purposes. Mortar sections will be kept together but machine gun and rocket squads may be assigned to individual platoon leaders as the Company Commander sees fit.

Because armored companies do not usually have mortar and machine gun assets, they do not have weapons platoons. Weapon platoons are almost exlusively ‘light’ infantry units.

At levels above battalion things usually get confusing. Three line battalions may make up a Regiment, but in the Marines that is a very loose term. A brigade may have one infantry Regiment, a tank company, an artillery battery, a recon company, ect. A brigade in essense is a reinforced Regiment.

Above the Brigade level it can vary not only from military to military but also from division to division. In some cases a Division includes only one regiment of infantry and hordes of ‘attachements’. Brigades will also include a great deal of support elements. The Marines is an example of this. A Brigade may include ground combat elements (like artillery and APC’s) but a Division may include air combat elements (like Harriers and Cobra helicopter gunships).

In some cases units can vary dramatically in size. US units are generally larger than Soviet units. For example a Soviet company has ten vehicles, a US company has about fourteen. A Soviet platoon with three vehicles will usually be outgunned by a US platoon of four. However, the Soviets had more platoons, companies and Divisions than the US.

August 26th. Later this month. The story continues as Mathison and Skadi hunted by the SOG and an ancient enemy, race against time to warn