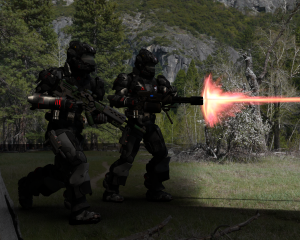 Two men make up a battleteam and they will never be far from each other. This is very important on a battlefield. First is the morale factor. A person is much more likely to panic if he is alone. He will feel cut off, in extreme danger and about to die. If someone else is nearby it provides a great deal of support because, if the individual is injured or lost, there is someone to help him or go for help. Other factors come into play also. If someone else is present the individual will attempt to mask his fear and in this way, more easily over come it. (This is one reason military forces do not readily acknowledge a soldier’s fear and encourage the ‘fearless’ attitude). Another factor is that in ‘tight’ units that the two (or more) are looking out for and relying on each other. When someone knows that someone else is doing their best to protect him from harm it has a very calming affect.

The battleteam is the smallest ‘unit’ employed for these reasons. When a squad leader does a recon of an area he takes someone with him as ‘backup’. Sniper teams usually operate in two man teams, very rarely do they operate alone.

There are exceptions to the ‘battleteam rule’. If a squad uses flank security than a single man will be put out on either side. However, the flank security people will not be too far from the rest of the squad if they run into trouble.

When the firing starts a battleteam should work together very closely. A pair of professionals will continuously be talking to each other. They will inform each other when and where they see the enemy, what kind of weapon the enemy has (especially if it is a machine gun). They will also tell each other when they are reloading or running low on ammo. Whenever a grenade is thrown a warning will be yelled so friendly forces can take cover. Pro’s will use special code words to prevent the enemy from understanding them. Words like ‘fire in the hole’ let friendlies know a grenade or other explosive has been loosed and is getting ready to explode. The word ‘grenade’ is very similar in many languages and it doesn’t take a rocket scientist to figure out.

A good team will also talk about their own status, especially if one is running low on ammo and/or needs to reload. This way the other person knows to conserve ammunition and keep the enemy from rushing his partner who is vulnerable. A magazine can be dropped from the weapon and abandoned but usually they are recovered for reuse. Also, if there are a few rounds still in the magazine they can be recovered if worst comes to worst.

A pair of pros working together is also more effective than an individual because while one is moving to a better position the other is forcing the enemy to keep his head down or fire less accurately. This is called different things, leapfrogging, fire and movement or fire and maneuver, depending on the ‘school’. Regardless of what it is called, the basics are the same.

Movement by a battleteam is like it is for an individual. Everyone moves from cover to cover and keeps the distance short. Many infantrymen are taught to use the phrase “I’m up, he see’s me, I’m down” in order to keep distances short. By the time the trooper has recited it, he has gotten up, moved a few meters and taken cover, fast and furious.

Two troopers working together also increase the chance of locating the enemy. Four eyes are always better than two.

On patrol a battleteam is also important. While one man is drinking water, relieving himself, eating or whatever, the other man is covering him. This allows the person to take care of business as quickly and quietly as possible without having to worry about the enemy catching him by surprise.

Two pros working together are also less likely to be surprised because they have different areas to watch for enemy activity. Amateurs might have their attention drawn to a stream or animal or something and everyone might be looking at it when the shooting starts. Regardless of other distractions, pros will try to concentrate on their area of responsibility.

Everyone has seen a movie where the good guys sneak up and cut the throat of the bad guy with a knife. This is one of the more difficult methods. Silenced weapons are preferred, bows or crossbows are secondary, knives are used when nothing else is available (like in most infantry units). A garrote can be used also.

Whenever a sentry is designated for ‘removal’ usually a pair of troopers is assigned the job of removing one or more sentries. One man employs the weapon (usually a knife) and the other man remains ready with his assault rifle (or machine gun) in case things go wrong.

When the fight begins the two remain stationary in their holes and if one is injured he has another person present to help him and/or get help.